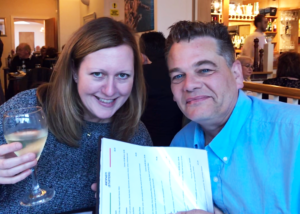 Allison & Thom Krimminger are the husband and wife team behind MF Scratch. Having spent the last 25 years in and around the entertainment and food industry, the MF Scratch philosophy is simple: Fabulous food using fresh ingredients. Good food and recipes serve as the backbone of any amazing event, and our culinary influences range from the global dishes we encountered throughout our world travels, to the classic foundations of cuisine, to carefully researched vintage southern recipes updated with modern ingredients and techniques. With a history going back to the first families of Charleston and Georgetown, Thom’s heritage runs deep in the low country. We both have great passion for this coastline and its history; preserving its Southern charm and character is important to us, including the food.

As a culinary graduate of the renowned Highbury College UK class of 1988, Allison began her career as a private chef catering to vacation villas in St. Anton, Austria, Zermatt, Switzerland, and Corsica, France. While working in Austria, Allison met an event planner with a company specializing in conference/corporate event planning and the rock n’ roll industry. This event planner introduced Allison to Eat Your Hearts Out , Europe’s go-to catering company specializing in the entertainment business.

Allison spent seven years with this company, cooking her way around Europe, South East Asia, the Mediterranean, Mexico, Russia, Eastern Europe, and all 50 US states. Clients included Prince, Michael Jackson, Guns & Roses, The Swiss Opera House, The Rolling Stones, Paul & Stella McCartney, and the British Government. While working on the Michael Jackson Dangerous Tour, Allison met her husband Thom, who was the laser lighting special effects designer. Romance sparked, and a year later, the couple were married and relocated to Atlanta Georgia.

As an industry event specialist with over 25 years’ experience, Thom was originally based in Los Angeles. Primarily working for Michael Jackson as the special effects laser lighting designer for his tours, Thom’s work ran the gamut and included video production, television commercials, movies, and music videos. In the mid-90’s, an employer’s business partner offered Thom the opportunity to move to Atlanta to design and stage the lighting effects for the opening ceremonies and at the Olympic Village for the 1996 Olympic Games.

Thom and Allison worked together on many productions while in Atlanta, including major corporate accounts for the Southeast and even, the World of Coke museum in Atlanta. Thom handled the event design and planning while Allison tended to the food & beverage needs of their clients.

After years of the city life in Atlanta, Allison and Thom decided to relocate to the coast for a change of pace and to be closer to family. Allison accepted an assistant professor position in the culinary department of the local community college. Thirteen years later, she had designed and opened four food service locations across three campuses while providing the event catering for the college, including the grand opening celebrations for the dental and medical expansions at the Grand Strand Market Commons and the agricultural center in Georgetown. MF Scratch was born when Allison and Thom decided it was time to venture out and combine their experience and skills to serve the Grand Strand and Carolina coast.